Spiders strike fear into the hearts of millions of people the world over. People both young and old suffer from arachnophobia, yet for the most part this is an irrational fear based on nothing more than implication. There are many species of poisonous spider yet the vast majority of these eight legged creatures are harmless. However, a very small percentage of spider are very dangerous and do actually pose a threat to humans.
Most people think of tarantulas or black widow spiders when they think of dangerous and poisenous spiders.  Another well known one is the funnel web spider.  But which of these spiders really are dangerous?  This is something that many people worry about.  So now we will have a look at the top five most deadly poisonous and venomous spiders known to man. 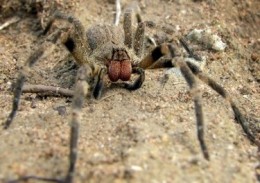 This deadly spider sits proudly at the top of our list. Thought to also be one of the world’s most aggressive spiders, the Brazilian wandering spider can deliver a seriously strong batch of poison to it’s prey. The wandering spider uses it’s two large fangs to deliver the venom and bites on humans can often prove fatal if not quickly treated. These spiders grow up to 15cm and are one of the largest venomous spiders in South America.
Often found residing on the floor of the jungle the wandering spider has a reputation for being found in banana plants. This spider often ends up finding it’s way into crates of bananas and then hitching a ride to a variety of destinations all over the world. For this reason the Brazilian wandering spider is often known as the banana spider, but it also has the names spawn of Satan and the armed spider. Wandering spiders live in South America and are responsible for several deaths each year. This is one thing you do not want to see next time your looking over a crate of bananas. 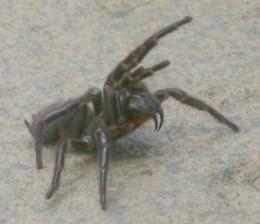 One of the largest and most terrifying poisnous spiders to be found anywhere in the world the Australian funnel web spider is the second most poisonous spider on the planet. This real brute of a creature can grow up to a staggering 25cm. The funnel web spider has two impressive fangs often measuring over a centimetre in length, these can pierce the skin of most creatures and the poison delivered is extremely potent. If left untreated a bite can kill a human in around fifteen minutes. The funnel web spiders are native to southern Australia and like to find cool dry spots under rocks, in rotten trees or under piles of brush wood. This is one spider you don’t want to find hiding in your bathroom. So that's number two on our countdown of the world's most posionous spiders list, what's number three? 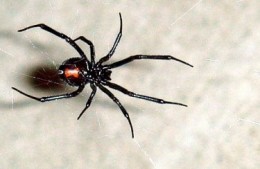 Probably the world’s most well known spider, the Black Widow sits at number three in our countdown of deadly spiders list. These creatures live all over the world although they tend to reside in warmer climates. The male black widow spider is not overly dangerous, it’s the female that poses the biggest threat to humans and other animals. At around 5cm these are only relatively small spiders yet they pack a mighty punch when they bite. Even though these have a deadly reputation bites are rarely fatal. The only deaths you really hear about when bitten by a black widow are ones where the victim already has poor health or somehow has a bad reaction to the poison. These spiders are often found under rocks, in drainpipes, gutters and under piles of logs. So despite it's deadly repuation the Black Widow is not as venomous as some people may assume, still though certainly a spider to be wary of. 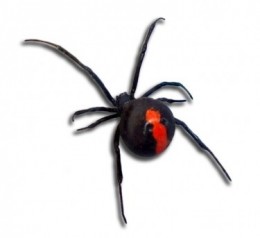 The Red Back Spider

Very closely related to the Black Widow and quite similar in appearance. The Red Back has a comparable strength of poison to it’s cousin but these spiders are not as widely spread. A native of Australia the Red Back spider is quite commonly seen around out houses, basements, closets and around bins. Again this spider rarely causes death when it bites humans but it has been known on rare occasions to produce fatalities. These spiders are very recognisable by the red stripe they have running down the length of their backs, for this reason they are often called jockey spiders.  So again not a nice spider to bump into as it does have a nasty batch a venom and can still be classsed as a very poisonous spider. 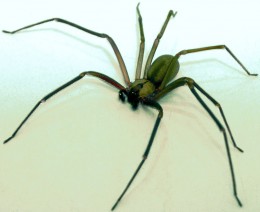 Last but by no means least on our list is the Brown Recluse spider. Native to north America these spiders are quite shy as suggested by the name. However if you disturb one of these and it feels in danger it will not hesitate to bite. The poison delivered by the brown recluse is very rarely fatal, however it can cause a wide range of symptoms ranging from paralysis to vomiting. Often known as the violin spider or fiddleback spider, they can sometimes be found inhabiting cellars, barns, closets, wood piles and anywhere else dry and warm. Although this type of spider only grows to about 5cm but is still one to be avoided if at all possible due to its nasty venom and poisonous reputation.
So although the vast majority of spiders are harmless to humans there are certainly ones that do pose a real threat and can be seen as very poisonous spiders.
Posted by Unknown

Email ThisBlogThis!Share to TwitterShare to FacebookShare to Pinterest
Labels: Animals